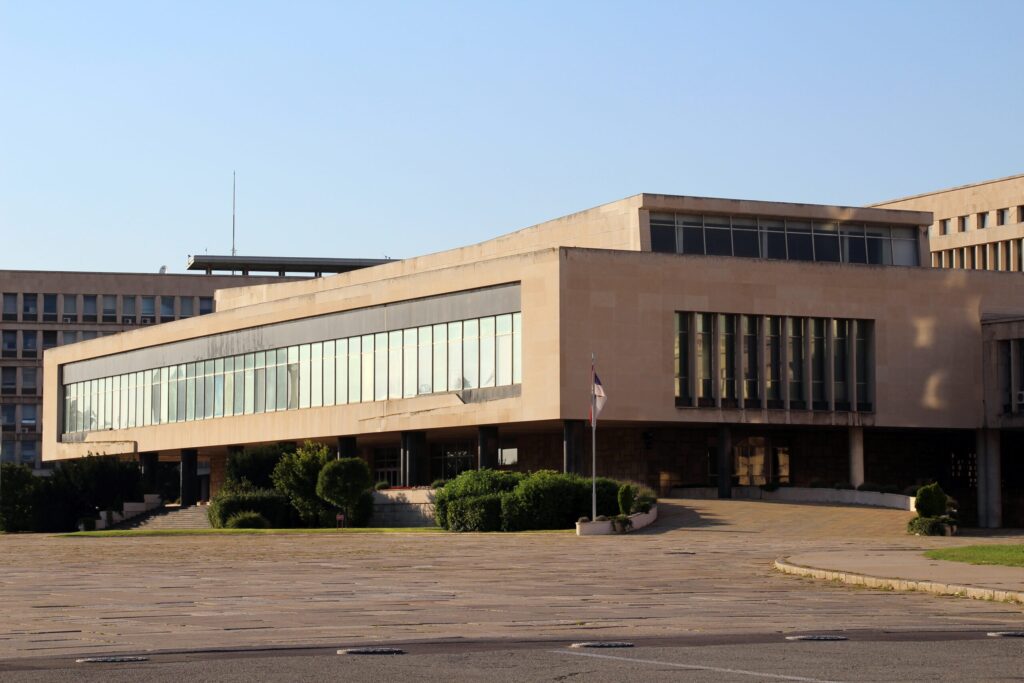 Everyone who visited Belgrade noticed very interesting features of certain buildings in the city. They are huge, gray, with simple but a clear-cut design. The critiques call them “cold-hearted” or “intimidating.” But paradoxically, those features are the essence of their attraction. And indeed, the brutal architecture in Belgrade is very famous as a symbol of one past era. Located mostly in the New Belgrade, these buildings, in their social-realist style, are the special curiosity for all the fans of modern architecture. Here, we will introduce you to a few of them.

Brutal architecture in Belgrade and Serbia – it is all about concrete

The new style emerged in the 1950s. It quickly became the most dominant architectural style in plenty of countries, including Yugoslavia. The buildings reflected the ideas of the socialist society. As such, they were convenient for the mass-housing projects. In that time, New Belgrade was under rapid and carefully planned construction. Previously a swamp, it quickly became a developed settlement characterized by big residential blocks, wide boulevards, green areas, and convenient infrastructure. Not very aesthetically pleasing and too gray, New Belgrade still managed to become a center of business and trade.

Genex Tower, or the Western City Gate are welcoming guests arriving in the city from the airport. The “gates” consist of two conjoined skyscrapers. The larger one is residential and has 30 floors. The 26 floors on the second tower were designed for commercial offices. A bridge on the 26th floor connects the towers. A concrete rotunda above the bridge was supposed to be a rotating restaurant. Interestingly, the rotating mechanism was never installed, and the restaurant itself was short-lived.

Likewise, Rudo, or the Eastern City Gate dominates the landscape at the opposite side of the city. Strategically constructed on a plateau, three 28-floor buildings are built in a circle. As a result, it always appears than one is located between the other two. Buildings are residential, with 190 flats in each one. Around 1,400 people live in this complex.

The essence of Yugoslavian history

The Palace of Serbia is also known as SIV (Federal Executive Council) and Palace of the Federation. As such, it was the site of the Federal Executive Council of Yugoslavia. It is the place where history was made. The Non-Aligned Movement held its first conference there in 1961. The gigantic building has a base area of 65,000 m². It contains 744 offices, 13 conference rooms, and three halls. Moreover, it has 6 salons, with each one named after one of the Yugoslav republics. The interior is truly breath-taking. Unfortunately, tours for visitors are possible only a couple of times a year.

Hotel Jugoslavija, on the Zemun quay, was one of the most comfortable and most luxurious hotels, not just in Yugoslavia, but in Europe as well. It had the honor to host many celebrities. Some of them are Queen Elizabeth II, Richard Nixon, Jimmy Carter,  Tina Turner, and Neil Armstrong. Due to failed privatization and neglect, the hotel lost its glory. Luckily, now is possible to book one of its 130 rooms.

The Museum of Yugoslavia, with its famous section “House of Flowers” is the site you have to visit. House of Flowers is the mausoleum and burial site of Yugoslavian president Josip Broz Tito. Exhibitions show some of his personal items, and gifts from other presidents. In addition, you can even see the items from the everyday life of Yugoslavian people. Here, you can certainly learn more about the history and culture of Yugoslavia. Of course, due to its importance, it is a part of our Story About Power tour. Book with us, and you will hear some interesting and little-known facts about the country that no longer exists!

Once the worldwide pandemic situation improves, you will have a chance to see these buildings in their grandeur. As always, safety is our #1 priority. We encourage you to stay responsible. Monitor your health and practice social distancing. Be considerate to other people, especially vulnerable groups. If you feel any symptoms of the coronavirus, do not travel. Instead, isolate yourself and contact the doctor. Stay informed about the most recent prevention measures. Further, we prepared some guidelines and resources for you.

Our team is certainly at your service at any time. We can create a tailor-made tour for you. The brutal architecture in Belgrade is a great photo opportunity, too! Just contact us, and let us take care of the rest.