The most beautiful Belgrade parks 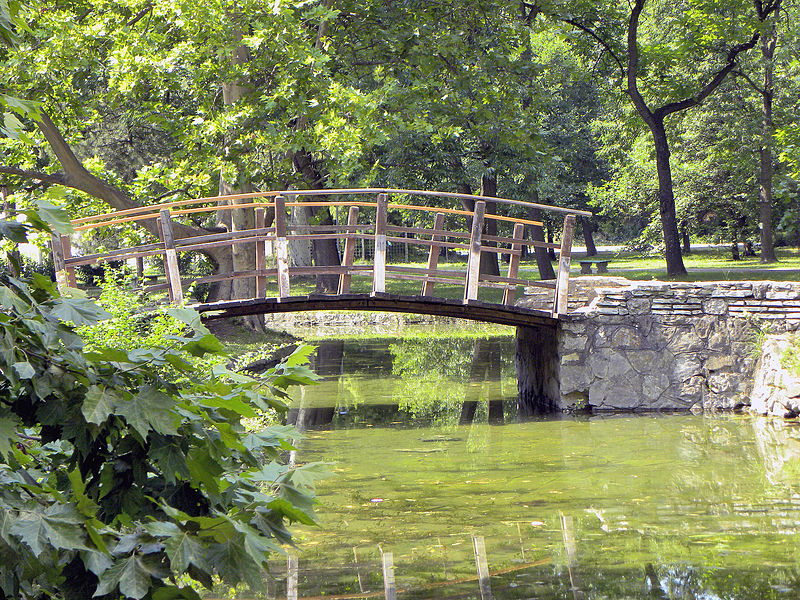 People always say that urban parks are “the lungs of the city”. And here, in Belgrade, we are lucky to have plenty of big and small parks, scattered all around the city. Especially during the hot summer days, parks offer respite from the extreme heat and plenty of shaded areas. We will introduce you to the most beautiful central parks and you will hopefully have a chance to enjoy them now in September when the weather is just perfect.

Tašmajdan – one of the central Belgrade parks

Tašmajdan is a very popular park in the center of Belgrade. It is famous for the St. Mark’s Church and Madera restaurant. There is a small Russian Church of Holy Trinity just beside of St.Mark’s Church. Park is pet-friendly too. There is a section for dogs, who can be let to run without the leash. The sports center and stadium “Tašmajdan” are just nearby, and of course, there are several clubs and pubs in the area as well.

Topčider park is one of the oldest Belgrade parks. It is located just a few kilometers away from the center of Belgrade. There, you can see the Residence of Prince Miloš (Serbian: Milošev konak), built in 1831 and the great Platanus tree – one of the oldest in Europe. Serbian Mint is also in this park. The small river Topčiderka runs through the park, and with little romantic bridge spanning over it, it creates a perfect photo opportunity. Do not get surprised if you see brides and grooms doing their wedding photo-shooting there!

Hyde Park (Serbian: Hajd park) is a small, triangular-shaped park, only 1 km north of Topčider. Obviously, it is named after the famous London’s Hyde Park. It has the tracks for running and an open-air gym, with recreation equipment. The Famous Museum of Yugoslavia, with House of Flowers, is in the park’s vicinity.

This large park-forest used to be a fenced hunting ground and royal excursion place. In 1903, it was open to the public and it became a favorite place of Belgraders. It is a home to rich and lush wildlife – even bats live here! Sports center Košutnjak has plenty of facilities – an athletic stadium, swimming pool, tennis club, and gym. Further, there are courts for football, handball, basketball, and volleyball. With 655 acres of area in the park, you will certainly have plenty of space for any activity you choose! Of course, you can just walk or ride a bike, and have a snack in available cafes and restaurants which are in the park. 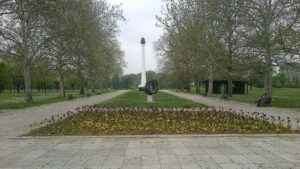 This large park, also known as Park Ušće, is the biggest New Belgrade park. It spans along Sava and Danube,  from Hotel Yugoslavia, all the way to Branko’s Bridge. The famous Ušće Shopping Center and Museum of Contemporary Art are located in the park area. Park was constructed in honor of the establishment of the Non-Aligned Movement, as Yugoslavia was one of its founders. Thus, the name is symbolizing the friendship among the nations. Presidents, officials, and celebrities planted a tree in this park as a sign of friendship.

Besides interesting monuments in the park, here you can find walking paths, such as the Avenue of Peace, running trails, and bike path. Moreover, if you feel tired, just sit in one of the cafes along the river. 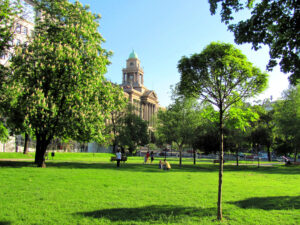 As we stated, Belgrade has plenty of parks and green areas. So, in addition to the ones we mentioned above, we suggest you visit some smaller central Belgrade parks. Some of them are Karađorđe’s park, just next to the Saint Sava’s Temple, Student’s park on Student’s Square, and Manjež. Of course, you can’t miss Pioneer’s park in front of the Parliament, and Terazije Terrace park, next to the famous Hotel Moscow (Serbian: Hotel Moskva) and with the Olympic Clock, which is counting down to the opening of the next Olympic Games. The newest park is certainly the Belgrade Waterfront park.

No matter which park you choose, you will enjoy the greenery and watch people relaxing, exercising, playing with their kids, and walking their pets. Hurry up, and use one of the last days of summer to experience our parks.