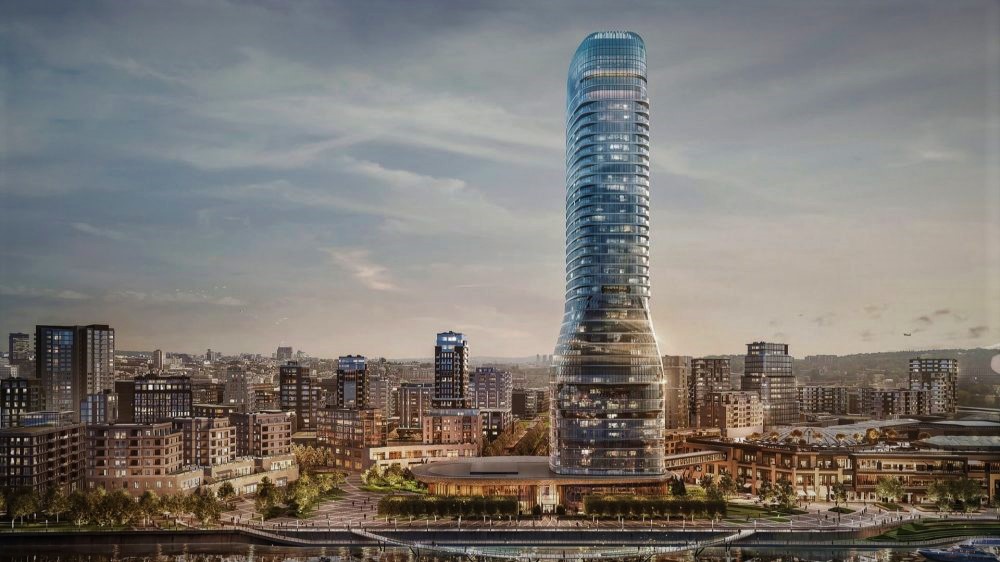 While we all take a break from traveling and take care of our health, we decided to present to you the new symbol of Belgrade- Belgrade Tower. The tower is currently under construction and is part of the Belgrade Waterfront project, a project, which implies monumental urban revitalization. It is claimed,  that this will be one of the most magnificent and tallest buildings in the Balkans.

Belgrade Tower, known as Kula Beograd, will become one of the symbols of the capital with an estimated height of 168 m. Belgrade Waterfront and the Italian company Impresa Pizzarotti signed an agreement on the export of works on this new landmark in Belgrade. The tower will be built according to the project of the famous architectural studio SOM (Skidmore, Owings & Merrill LLP). The aforementioned company also signed world-famous buildings such as Burj Khalifa. The other one is the World Trade Center on the site of the demolished Twins in New York.  Of the planned 42 floors, the first 9 are for hotel accommodation. The rest will be branded apartments within the luxury franchise St. Regis. Additionally,  it is a part of the Marriott International hotel chain.

In the 20th century, only three buildings higher than 100 meters existed on the territory of the capital. The tallest among them is the Genex Tower from 1980 with 115 meters. After this, the Usce Tower and Belgrade Palace (known as Beograđanka) were built in 1961 and 1974, respectively. 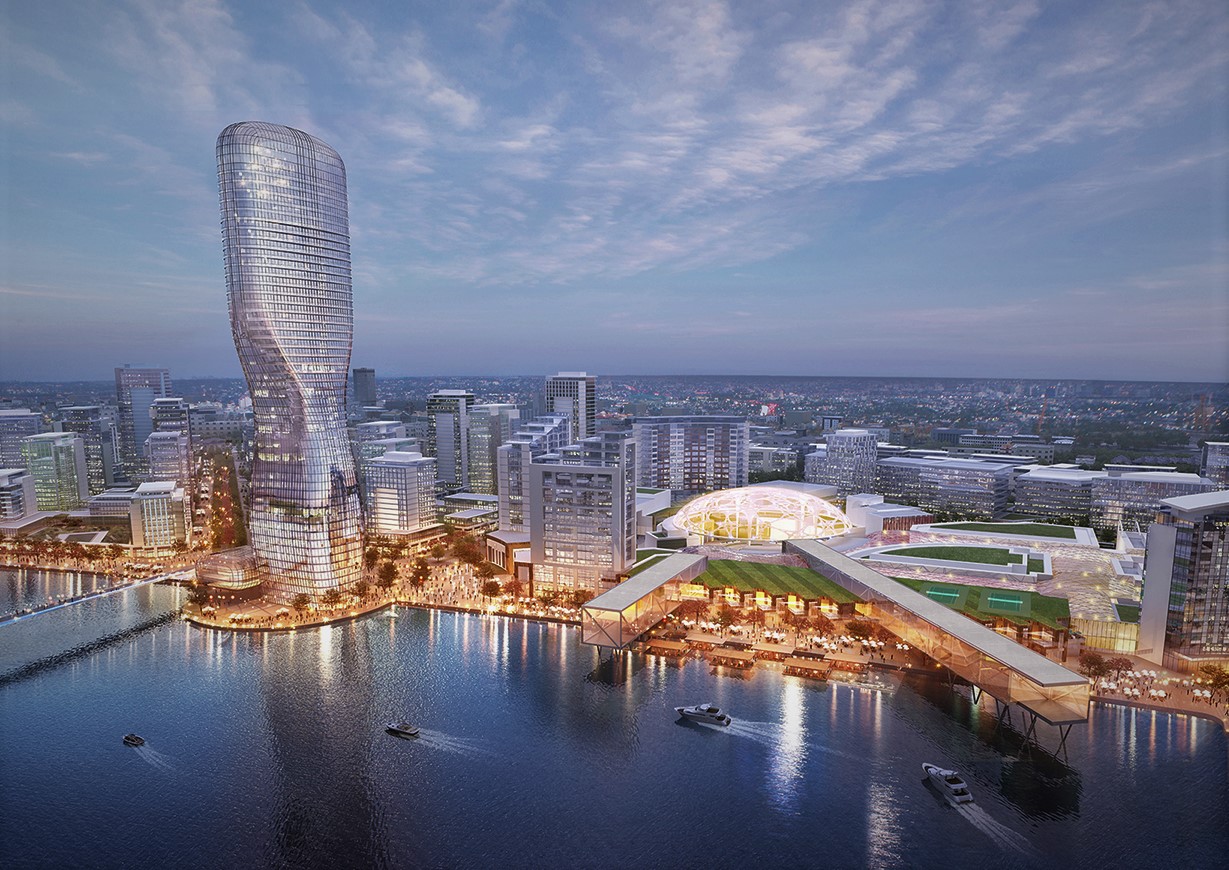 According to the design plan, Belgrade Tower location is at the heart of a public plaza. It is an outdoor venue stretching over more than 12,000 m2.  Inspiration for the design of this new city area within Belgrade Waterfront is the art of European squares. The building itself is a mix of the urban culture of Belgrade and its natural surroundings and long history. It will have a predominantly residential function.

The building’s base will be very memorable. There is already a claim that this will be a true masterpiece. Rectangular base with rounded corners and construction slightly rotated in two directions is not something you see every day. Or is it? This specific shape of the structure gives a dynamic to the façade, that is for sure. However, it is important as an aerodynamic solution to wind resistance, too. The facade of the building will be some kind of wall-curtain with the construction of aluminum sunshades and laminated glass. As you approach it you will have the impression that the futuristic glass tower is right in front of you. Also, natural tones create a timely and pleasant experience. Here you can see the potential look of the tower.

The St. Regis hotel and other facilities

Belgrade Tower will be the most visited point in Belgrade. It can be a place for daily relaxation, but also for the organization of various cultural and entertainment events. The building will become an attraction, which will host interactive events and celebrations year-round. 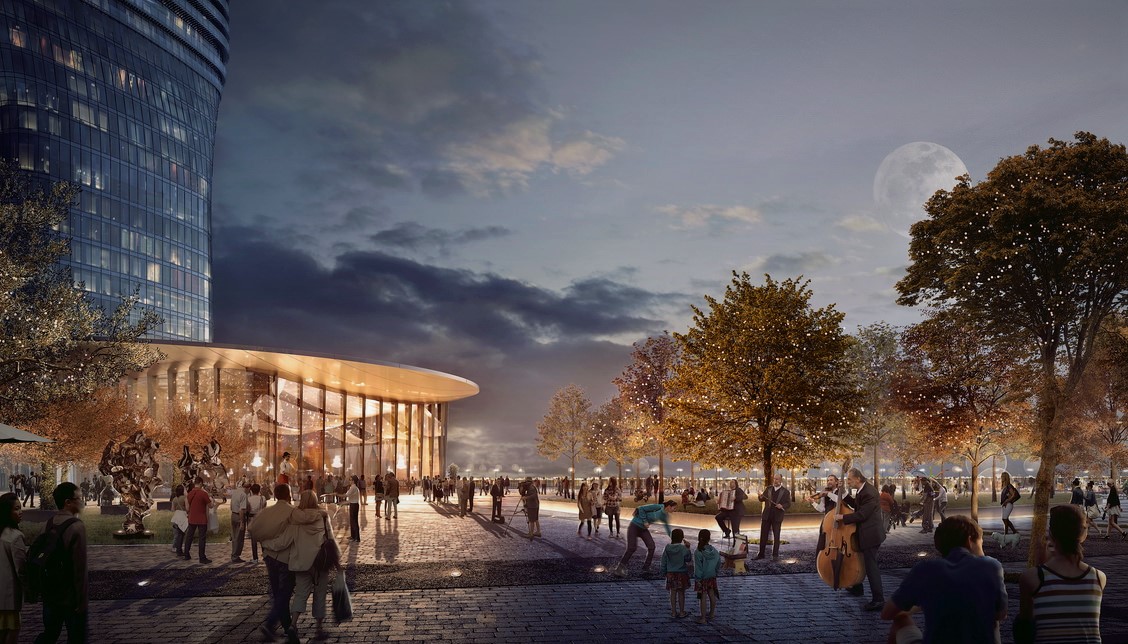 This spectacular construction will also be the place with the best hotel service. The St. Regis hotel will exclusively take over nine stories of the tower. In its offer will be 125 elegant rooms. The interior, as well as exterior, will be enchanting.  Moreover, a  view from its interior will beautifully reflect the city’s daily pulsation and the sparkling light of the sun. Pool, gym, training room, SPA, meeting rooms, restaurant are just some of the facilities with the location within the building. Everything you need for a day off.

However, what will attract people the most is definitely the view from the top of the building itself. The visitors will enjoy the breathtaking panoramic 360-degree view. Just remember how beautiful Belgrade is. Now, imagine what it looks like when viewed from a great height. It will seem to you that the whole city is in the palm of your hand. We guarantee you will enjoy it.

Be patient, though.  The building construction completion is planned for the next year or the beginning of 2022. Until then enjoy the articles we prepare for you every week. Those who have not yet visited Serbia will want to visit it. On the other hand, those who have already visited it, they will want to come back. We advise you, however, to wait for the situation with Covid-19 to stabilize, so you can safely enjoy your stay in Serbia. Until we meet again, stay safe, and wear a mask!