Zastava Yugo is one of the symbols of old Yugoslavia – and Serbia as well! This legendary car was designed in Italy but manufactured in Yugoslavia. There were many critiques about the car’s design and performance, but regardless of that, Zastava Yugo was a prestigious car at that time. We can even say that it was a source of national pride! 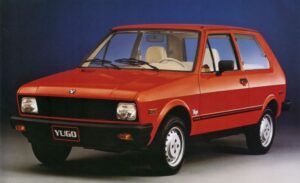 The design of the vehicle was based on Fiat 128, which was produced in Italy. Parts for Zastava Yugo were coming from different Yugoslavian republics. The engine’s electrical parts were coming from assembly lines in Bosnia and Herzegovina. Slovenia was producing other electrical parts. Croatia was in charge of the production of interior fittings and brakes. Macedonia was the production site for seat belts, locks, and mirrors. Finally, Serbia was assembling the car, in a factory named “Zastava”! For those reasons, Zastava Yugo was really a national car. Further, it was more than that. Yugoslavia was exporting Zastava Yugo to many different countries, mostly in  Europe. The most important was in fact the export to the United States of America.

Not just national – it was international!

Thanks to Malcolm Bricklin, the famous American businessman who specialized in the import of cars, the Yugo became available on the American market. Its retail price was $3,990, making it the cheapest car available in the USA. The sale was greatly successful at the beginning. Of course, it had its ups and downs, as Yugo did not always meet the requirements of American customers. Some of them criticized the performances of the Yugo and even called it “the worst car in history.” But still, the production and sale of Yugo were continuing. Luckily, Yugo did not lose its fame. It was exactly what the designers wanted it to be – simple, functional, and economical car. For city rides, it was just perfect.

Yugo also gained its popularity as the first car from a socialist country, on the American market. The export continued until the break-up of Yugoslavia. Unfortunately, due to sanctions being imposed on Yugoslavia, the export of Yugo and its parts halted. Consequently, the popularity of this car sharply dropped. Officially, the production ended in 2008.

It was cheap, affordable, and simple – just as Yugoslavians loved it. The car was so easy to maintain and owners were even able to fix it themselves, as the parts were widely available too. The police forces around Yugoslavia used Zastava Yugo as their vehicle. In every movie of Yugoslavian production, you can see this famous car in the frame at some point. Hence, it is an inseparable part of the pop-culture of that era. As the fans love to say, Yugo was a car with the soul. 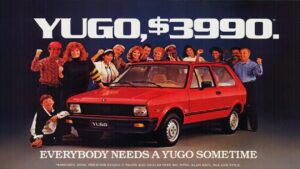 Hop on for a ride!

We know that you would like to hop on the car and ride back to the 1980s! Or maybe you want to be behind the wheel and go for a test drive? More Than Belgrade team will make it possible and arrange this vintage car upon your request. Then you will be able to tell us if all those Yugo-related jokes and punchlines are truth or just urban legends.