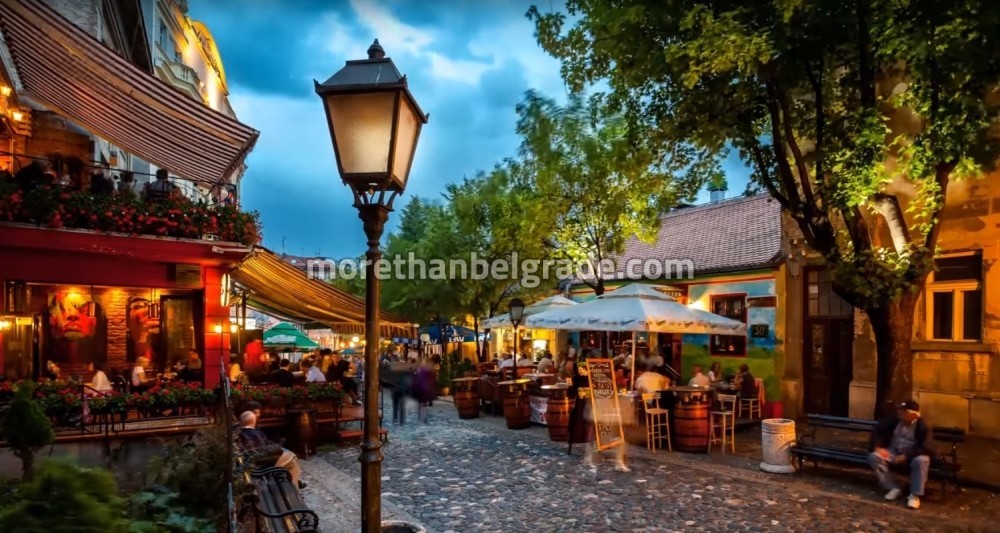 Even today, Skadarlija is a symbol of Belgrade, although the big shopping malls have become the “new centers” of the capital. Still Skadarlija stands out as a tourist destination, a bohemian quarter, an indispensable corner for foreigners.

It is interesting that during the construction of Bailon’s Brewery, in 1892 near the Skadarska street, the skull of the Homo primagenium was found and several teeth of mammoth. According to scientists, the skull belongs to the “first Belgrader” who disappeared during the First World War.

The first buildings on the soil of today’s Skadarlija were built around 1717. In the middle of the 19th century there was a Gypsy mahala (Šićan-mala) with fourteen houses, which in 1872 officially became Skadarska Street.

To this day the cobblestone has remained and defended the tradition of this ethno-corner of Belgrade. 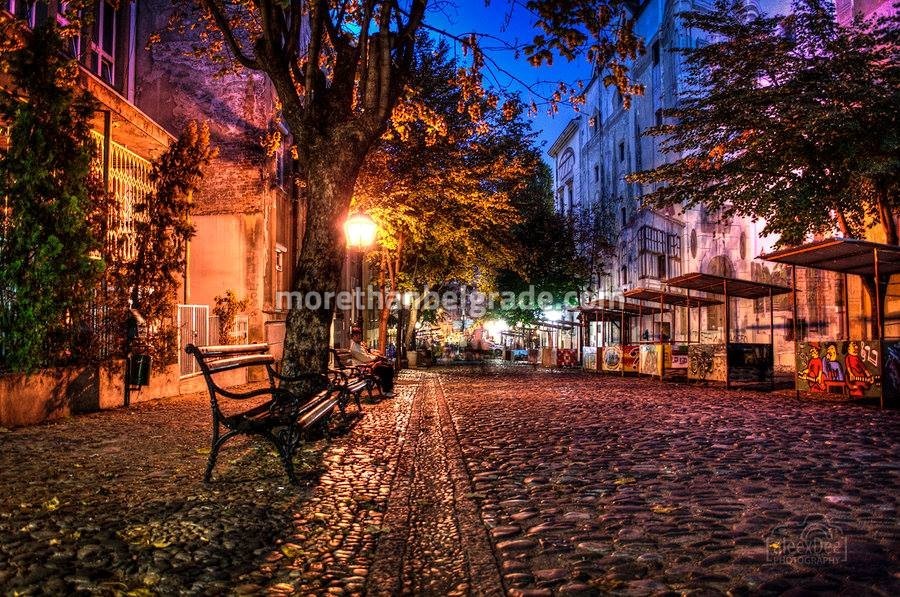 It is interesting that until the 19th century a stream flowed in the middle of the street. “Small Brewery” grew into “Bailon’s Brewery” and at the end of the 19th century the famous bars “Bums keler”, “Vuk Karadzic”, “Zlatan bokal”, “Milos Obilić” and “Bandist” and the most famous Belgrade cafes ” Three Hats “and” Two Deer “.

According to “Guide through Belgrade” from 1909, there were 14 cafes in Skadar and surrounding streets, when around 90,000 inhabitants lived in the city.

At the entrance to Skadarlija, at the end of the 19th century, there was a café “Pashonin Boulevard”. In addition to the garden, she also had a large hall for games and weddings, which was the first Belgrade musical hall. About 1908 the first performances of the Belgrade Opera were held at that place. After the fire was over, the cinema was opened in the same place, which was called “Balkan” since 1928. 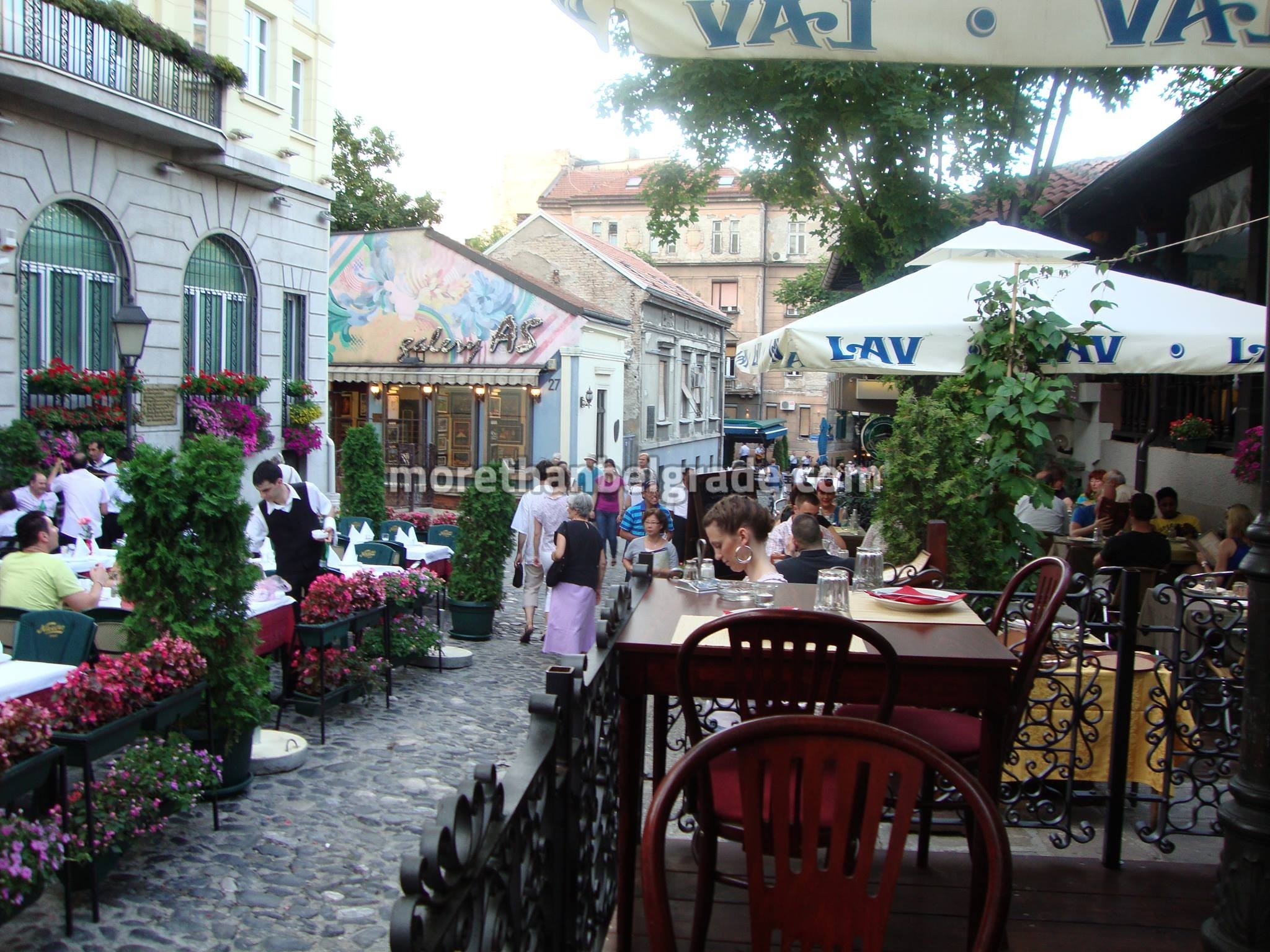 Many bars have disappeared, among them the popular “Esnafska kafana”, “Vuk Karadzic”, “Zlatan bokal” (the most famous permanent guest – Djura Jaksic). In 1929, the “Bums Keler” cafe also stopped by Josephine Becker, who also remembered Belgrade by delicious kebabs. Bums’s basement was most often visited by Tin Ujević, the Scarlet King. By the middle of the 20th century, the renowned cafes “Bandist” and “Filipov brewery”, whose regular guest was Bora Stankovic, stopped working. 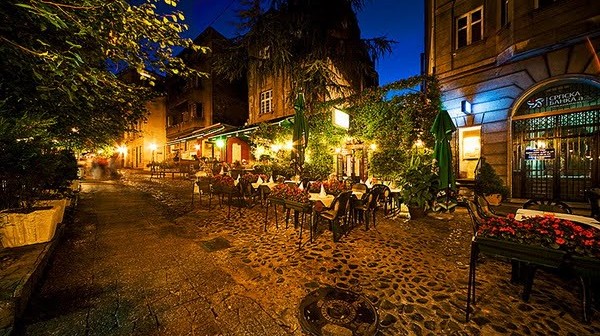 In the middle of the 20th century, more precisely in 1966, according to the project of the architect Uglješa Bogunović, the reorganization of Skadarlija began. The goal was to revive the tradition and to modernize. Since then, the Shkodra pedestrian zone, restored cobbles, lanterns and candelabra, the “Three Hats”, “Two Deer” and “Skadarlija” have been added. “There are days”, “Golden bokal” and “Two white birds” have been reorganized.

The monument to Đuri Jaksic is a symbol of Skadarlija, and was set in 1990 in front of the number 34, Houses of Đure Jakšića. The bronze monument is the work of sculptor Jovan Soldatovic.

The monument to the scandalous drummer is in the garden of the tavern “There are days” since 1990. Tom Serafimovski’s work was set in memory of actor Rade Sobot.

The monument to the traveling actor, in honor of Joakim Vujic, was made by sculptor Jovo Petijevic, and since 1989 he is on the corner of Skadar and Gospodar Jevrem.

The new Skadarlijska fountain, the work of the sculptor Milica Ribnikar, was erected in 1966. At the crossroads of Zetsko and Skadar, every year, the Skadarlija flag opens the summer season.

Through the street in which once lived, lodging, today is just passing; left to visitors, to guests, to strangers, some of its inhabitants went out of it. Not as a hub and a promenade, it is only a shortcut nowadays – at the Strahinjića Bana Street.

Left without spiritual orientation, without knowing how and where to go with it, without living cultural effort and tendency, without genuine concern, without a host. She is always half-witted, she is holding on to the impoverished corners of her bohemian myth and dionysian past, she says in the stories of retired waiters who, in the density of barbecue smoke, all the guests in the glorious age looked the same.

Nevertheless, the Tourist Organization of Belgrade continues to promote Skadarlija, and up to 20,000 people pass through the Bohemian Street during the summer season. The former atmosphere is fascinated by the actors dressed in civilian costumes from the beginning of the 20th century. Various programs are complemented by the café ambience, and “City Market” has been setting up some twenty painted stalls in the past few years where souvenirs are sold during the summer.

In addition to gastronomic and cultural-artistic offerings on weekends, there is a 500-meter-long walkway and a scandalous drummer. The Municipality of Stari Grad has been trying to update the House of Đure Jakšić in recent years, and more and more important programs (exhibitions, concerts, workshops, literary meetings …) are organized throughout the year.