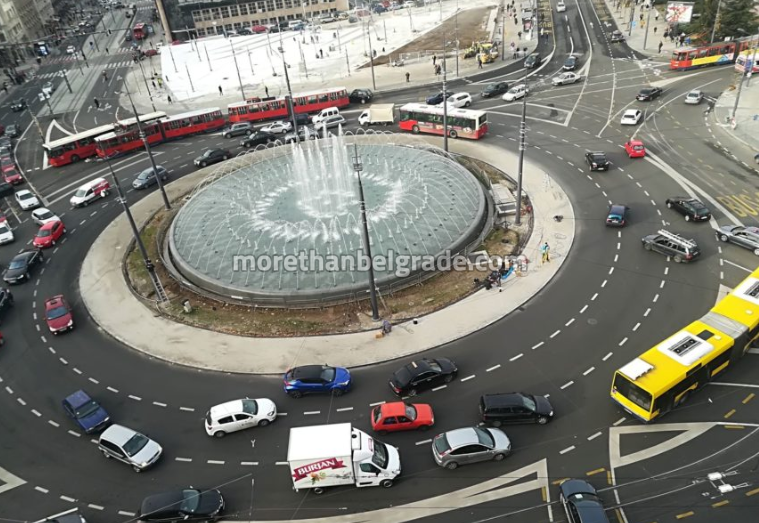 The new musical fountain on Slavija Square in Belgrade cost the citizens an incredible 1.8 million euros, which is more than 300,000 euros more expensive than officially the most expensive and largest multimedia fountain in Europe!

Described as “the largest fountain in south-eastern Europe” on the city’s website, the huge fountain is 32m in diameter and is made up of 350 water jets.

Supporters of the new fountain defended it from online critics with claims that it will improve the city’s climate by spurting water into the air.

As you would expect from a musical fountain that cost 1.8 million euros to build, it is truly impressive and captivating both its size and with changing music genres and constantly changing colors from mauve to red to blue to green to aqua to yellow.

The fountain is really fantastic.

It is situated on the Slavija square and surrounded by two Slavija hotels in which many tourists stay.

Many Belgraders and tourists stop to admire this fountain, to take picture in front of it, even some of them danced because the fountain play various music songs.

Here everyone can relax and enjoy.

The fountain is beautiful in the afternoon or even more beautiful at night.

Because of its lighting, this place always reminds of some kind of outdoor party.

Young people usually after visiting this fountain decide to go to some nearby clubs to continue to spend quality time and continue partying.

This fountain is becoming a part of Belgrade night life in a way..

Citizens and tourists will be able to enjoy in music fountain during winter as well because it will work thanks to the built in heaters which will work up to -20 degrees.