Everything you Need to Know About the Bridges of Belgrade 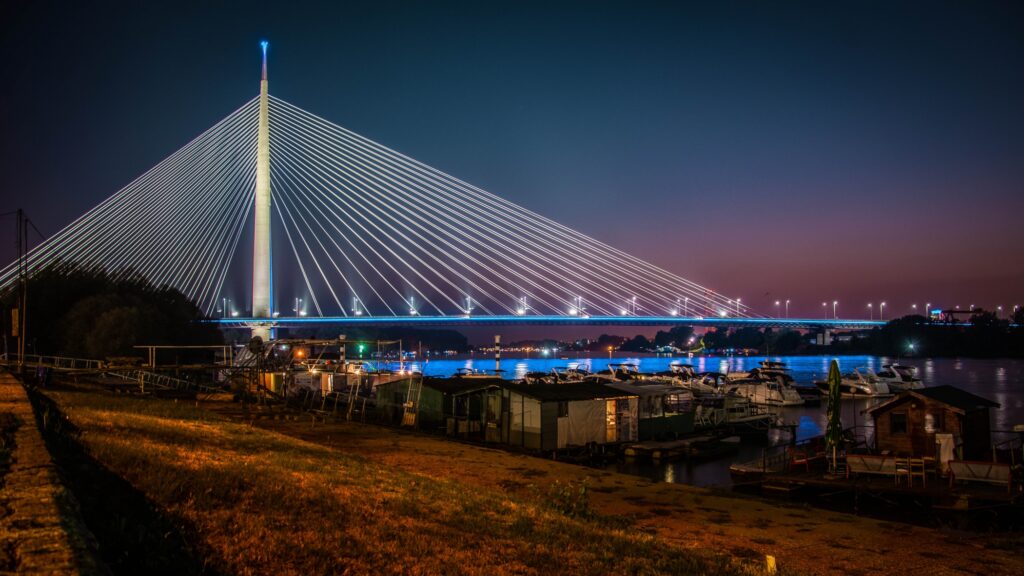 The bridges of Belgrade are not just ordinary ones that connect two rivers. They are also a symbol of life, love, and friendship. There are various bridges. Long and tall, small and big, beautiful and less beautiful. What they have in common is that they connect what nature itself could not connect.

There are 9 bridges in Belgrade, 7 of which are over the river Sava and two over the Danube. The bridges mainly connect New Belgrade and the city center. The bridges of Belgrade are the backbone that the city cannot do without. Each of them has an interesting story, urban legend, or an incredible construction endeavor. 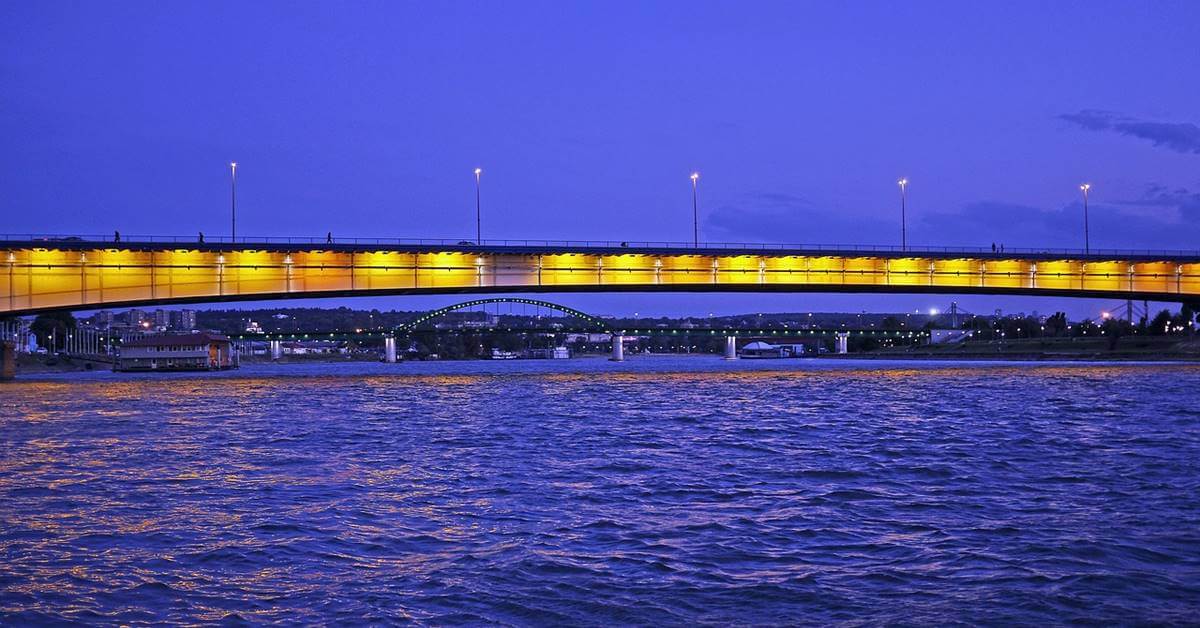 The first, beautiful road bridge opened on December 16, 1934. At that time its name was the bridge of King Aleksandar Karađorđević. Hitler’s bombing partially destroyed it in 1941 and completely destroyed in the American bombing of Belgrade in 1944. It was then rebuilt in 1956 and named the Bridge of Brotherhood and Unity. The people, on the other hand, accepted the name Branko’s Bridge.

It got its current name after Brankova Street, whose continuation it represents. The street got its name after the poet Branko Radičević and not after the writer Branko Ćopić, who committed suicide by jumping off it. The bridge connects Old and New Belgrade over the Sava river. 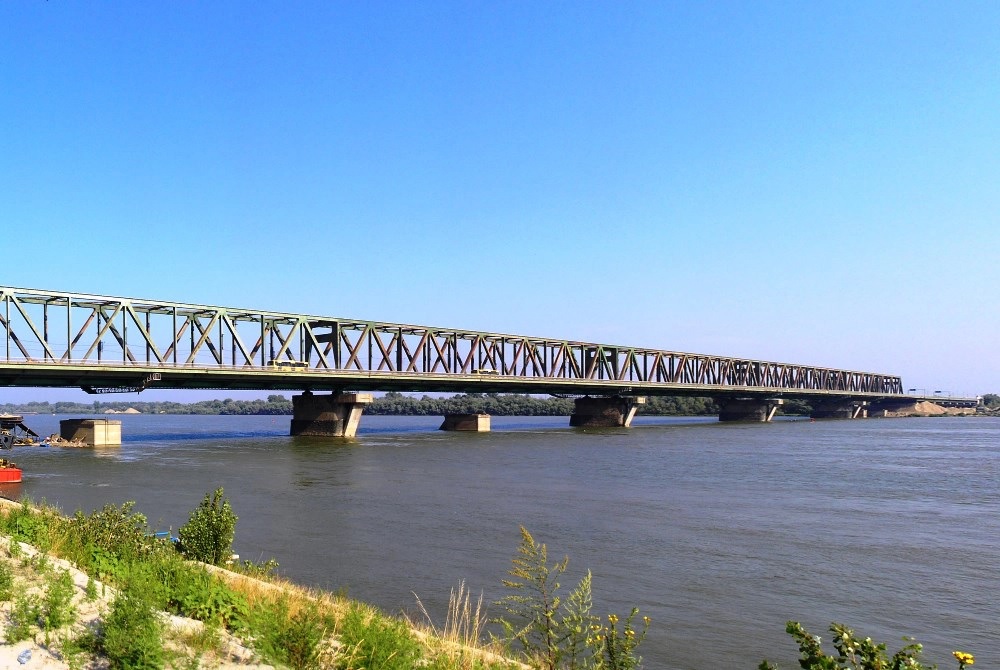 The Pančevo Bridge is the longest Belgrade bridge. Since 1935, the year of its formation, people called it the King Peter II Bridge. The Yugoslav army demolished it on April 11, 1941, in order to prevent the Nazi army from penetrating Belgrade. It was renovated and reopened on November 29, 1946. This was the only bridge over the Danube in Belgrade until December 2014, when the Pupin’s Bridge opened. It combines road and rail transport. 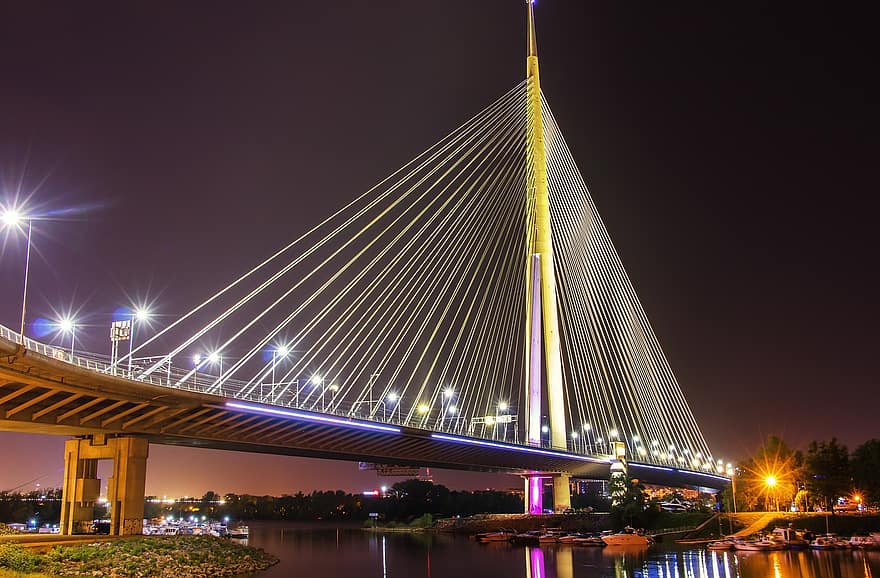 The largest and most expensive bridge of Belgrade is certainly the Ada Bridge, which connects the two banks of the Sava. It has six traffic lanes, two pedestrian and bicycle paths, and two subway tracks. Also, it is the largest suspension bridge with one pylon and is one of the biggest attractions in Belgrade. Its name comes from the river island of Ada Ciganlija, and it was opened for public traffic on January 1, 2012.

What is interesting is that this is the third bridge in the world in terms of the length of cables on which the bridge is hung. Namely, the length of all cables hung on the pylon is about 1,000 kilometers, which is approximately the same distance between Belgrade and Ankara. In terms of cable length, this bridge exceeds only two bridges in Russia. 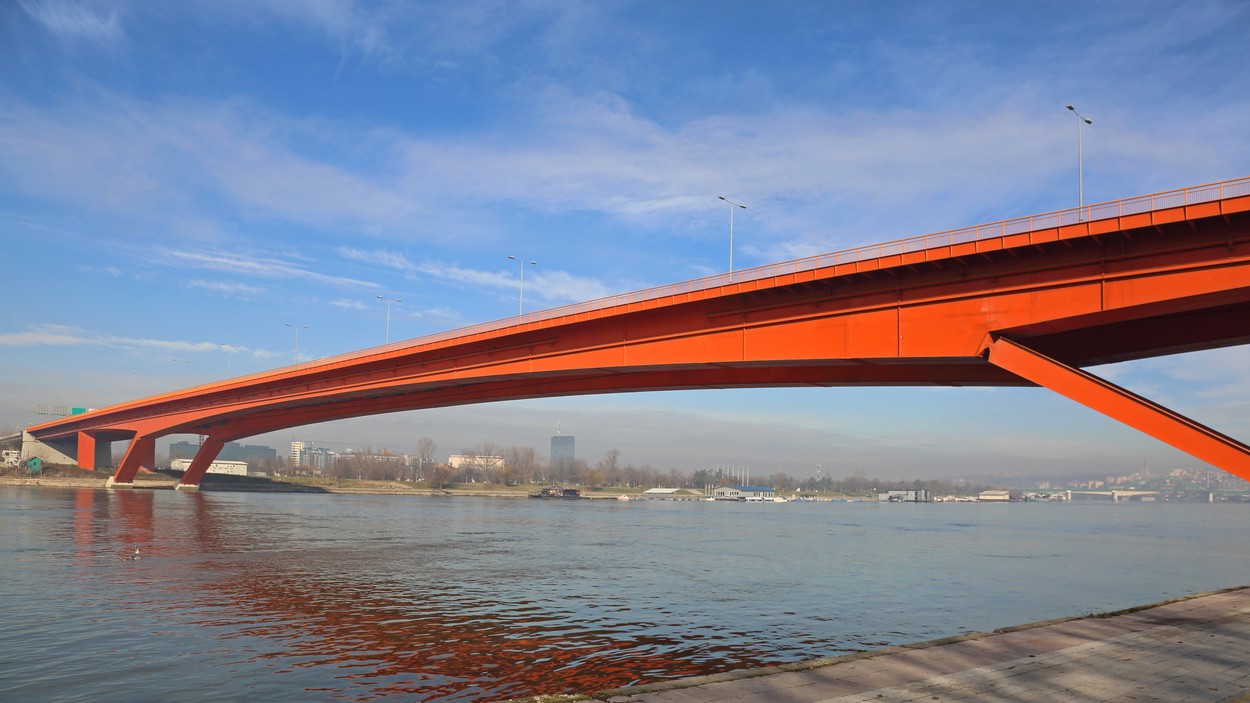 The shape of the bridge resembles a gazelle in a jump, which is why it got its name – the Gazelle. The construction of the bridge lasted from 1966 to 1970. The busiest bridge in the city is above the river Sava. It is part of the famous Mostar Interchange (in Serbian Mostarska petlja), one of the most perfect systems of this type in Europe.

This bridge is in some ways unique and the first in the world. Namely, it is a construction combination of beam and arch systems. The gazelle is a bridge of crooked pillars which makes it seem unstable. The reaction of the first lady of the former Yugoslavia, Jovanka Broz, still recounts. One time she came with Tito to visit the construction site while the bridge was not yet assembled in the middle. She was confused and wondered how it would stand without single support in the middle. 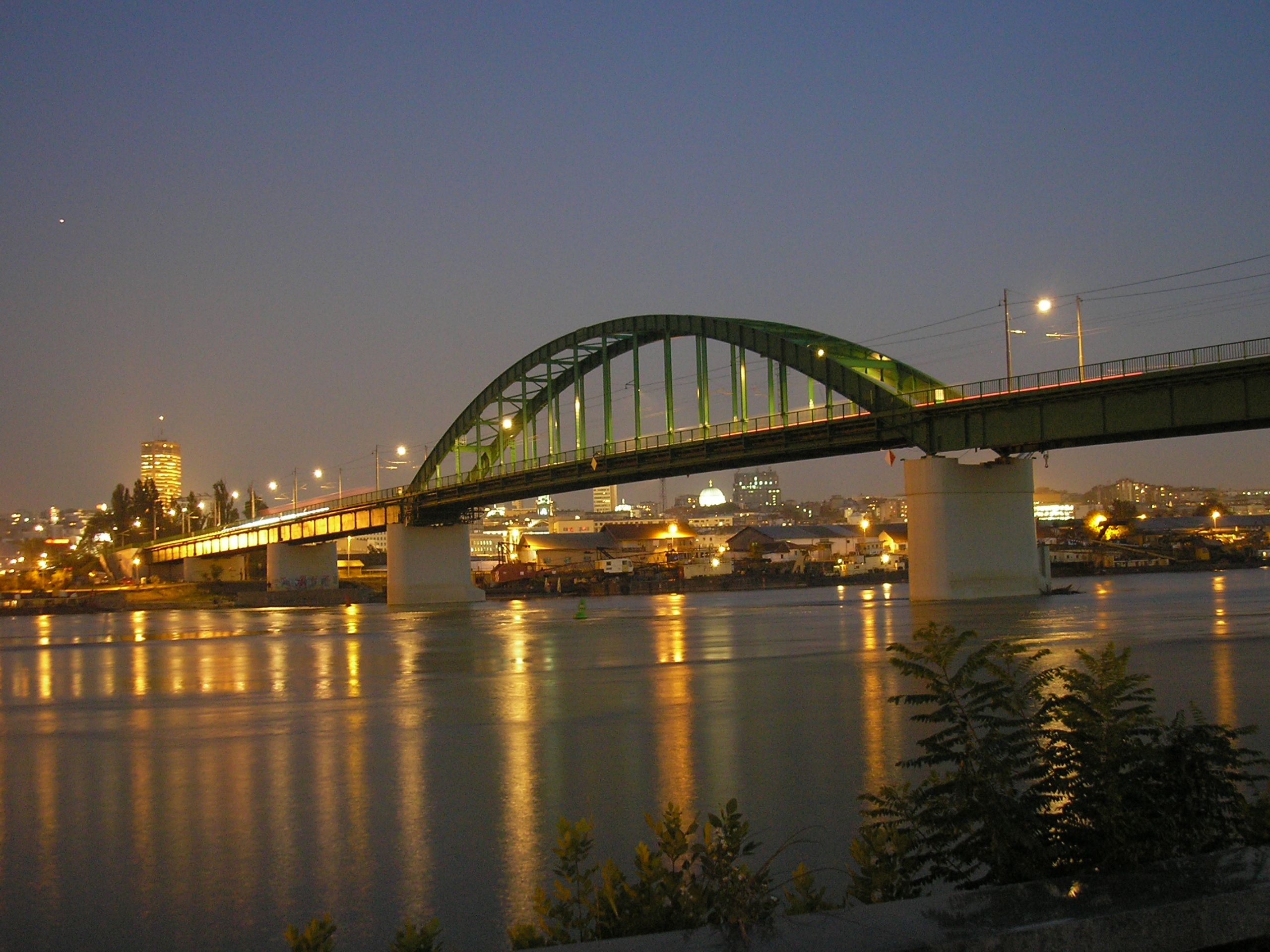 The old Sava bridge is the smallest bridge over the Sava today. Once, the plan was not for it to even stand there. It existed during the German occupation in 1942. Its name then was the Prince Eugene Bridge, since the King Alexander Bridge that connected Belgrade and Zemun was demolished. During the withdrawal from Belgrade, the Nazis planted dynamite on October 20, 1944. They wanted to knock it down, but Belgrade teacher Miladin Zarić cut the fuse and saved the bridge.

In addition, the old Sava bridge is very little used and is not under great load. 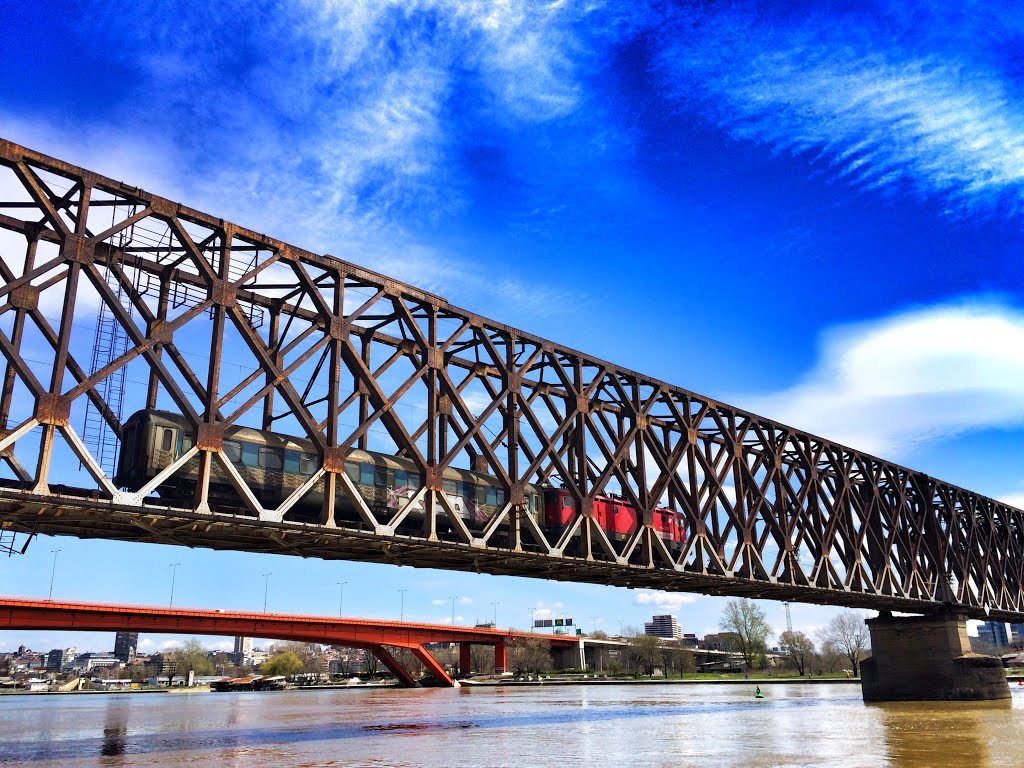 Many demolished the bridge. Many rebuilt them afterward. Additionally, it is a witness to all wars and has the most turbulent history of all bridges of Belgrade. Construction has begun in January 1882. For 30 years it served the people of Belgrade to cross from one bank of the Sava to the other. Today’s old railway bridge dates from after the end of the Second World War. It was the only Belgrade railway bridge over the Sava until the construction of the New Railway Bridge in 1979.

The bridge connects Belgrade with Zemun, which was in Austria-Hungary at the beginning of the 20th century. In order to make it difficult for enemy troops to access Belgrade, Serbs destroyed it twice. 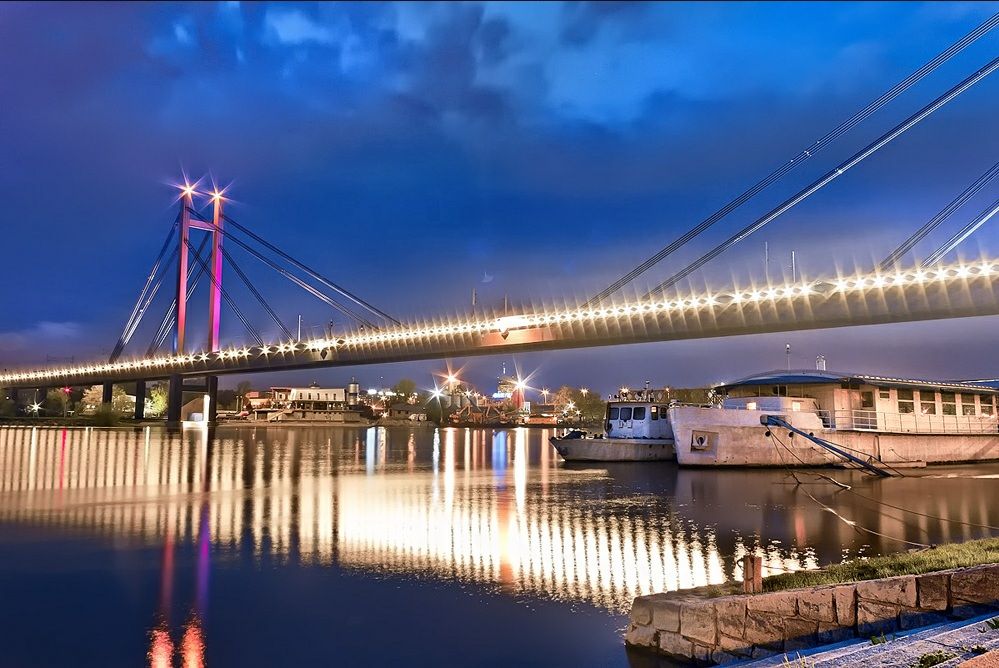 New Railway Bridge is a cable-stayed bridge over the Sava river in Belgrade. This is a two-track bridge 250 meters upstream from the Old Railway Bridge. It was built in 1979 as part of the reconstruction of the Belgrade railway junction. Academician Nikola Hajdin designed it. At first, it was one of the recorders. It was the first suspension bridge in Europe. 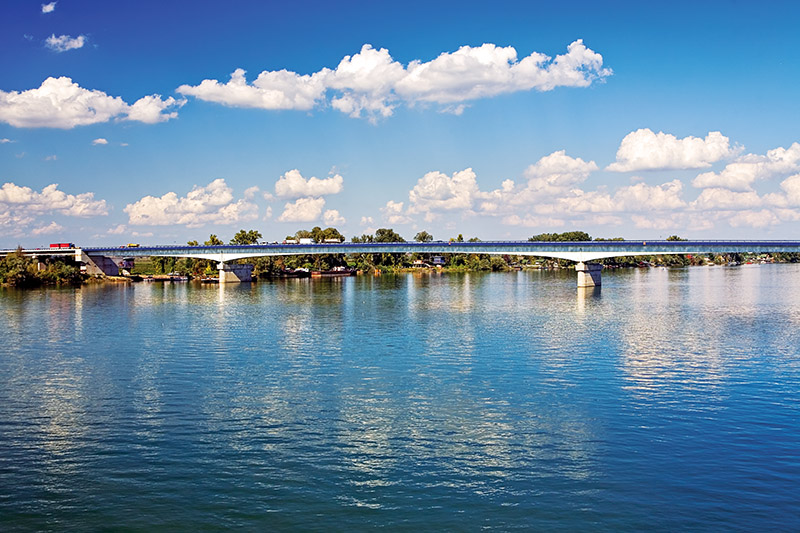 The Ostružnica bridge bridges the Sava. It is a six-lane girder bridge carrying the Belgrade bypass over the Sava at Ostružnica. The NATO bombing destroyed the bridge in 1999 and its reopening was in 2004. The significance of its re-entry into traffic is very great. Since then, the Belgrade railway junction is more organized than before. 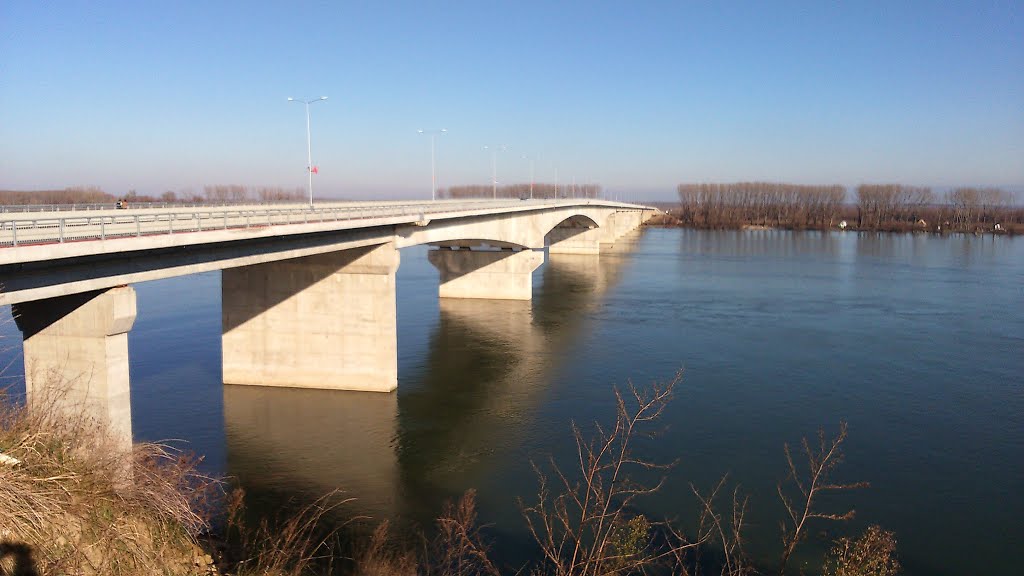 Pupin’s Bridge connects Zemun and Borča since 2014. It is the youngest bridge in Belgrade. This is the first bridge on the Danube since the Pančevo bridge, built in 1935. It is also 1,517 m long and is part of the bypass around Belgrade. Colloquially it is the Zemun-Borča or the Chinese bridge. However, he got its name after Serbian scientist Mihajlo Pupin.

Are you fond of Serbia and its culture? For more interesting stories and facts about our country, follow our News section and our Instagram page.