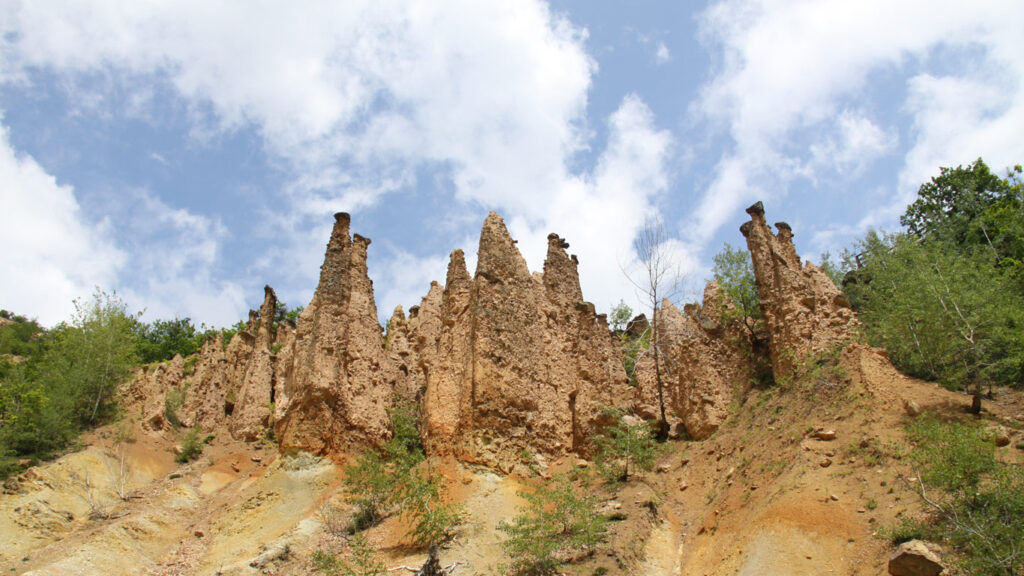 Đavolja Varoš is an extremely interesting location in south Serbia. Its name roughly translates as “The Devil’s Town” and it is a geological site of great importance and interest. There are many legends about the formations and name of this place, so here we are going to share some of them with you. No matter which explanation you trust more – scientific or traditional – we can all agree that this site is unique in the world and definitely deserves the attention.

Serbia nominated Đavolja Varoš as one of the New Seven Wonders of Nature. Unfortunately, it did not make a cut. However, we consider it as our national wonder of nature. As such, this natural site of great importance is under the class I protection of the state. 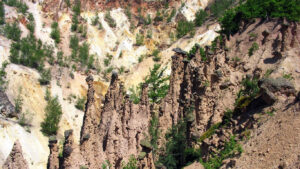 The locality has over 200 formations, with intriguing stone caps. They are 2 to 15 meters high and 0,5 to 3 meters wide. The figures are created by erosion. However, the scientists are amazed by the strength of these pillars, as their stone caps can weight several hundred kilograms!

Đavolja Varoš was considered as an “off-the-beaten-path” destination until it was nominated for New Seven Wonders of Nature. Then, the number of visitors increased and it became a “must-see” destination of Serbia. As expected, it is amazing to see the artwork of water, wind, rain, and sun. There are similar sites in the world, but they are smaller and with fewer figures than Đavolja Varoš.  In addition to tourists, many scientists and geologists are coming to study the formations and the effects of erosion on the soil.

Besides figures, there are two mineral springs with highly acidic water – Crveno vrelo (Red spring) and Đavolja voda (Devil’s water). In fact, they are among the most acidic springs in the world – the pH value of Devil’s water is 1,5! Local use them for medical purposes, but be careful if consuming the water – it is full of iron, zinc, and copper. The area is so rich in minerals, that it used to be a mining site. Indeed, in the complex, you can see the remains of the medieval Saxon mining pits. 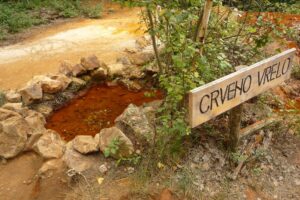 The peculiar shape of the formation made people very curious about them. As they did not know the modern and scientific explanation, they used their imagination to create legends and myths about those figures. There are plenty of them, and if you ask locals, do not be surprised if you hear several different stories.

One of them says that the devil poisoned the water, which drove the villagers to the madness. Then, he convinced the people into marrying brother and sister. To prevent sin and punish the village, God turned them all into the stone. So the figures are in fact, the wedding guests. In another version, two men wanted to marry the same girl and they all went with their families to propose to her. God wanted to prevent the bloodshed so he froze them in time and for eternity.

Another legend says that the villagers decided to disobey the powerful ruler who was as evil as the devil himself. In revenge, he decided to petrify them. The “scariest” interpretation is that the devils were terrorizing the village. Only when locals spent one night next to the nearby Church of St.Petka, the devils died and calcified.

The wind blowing over and between the figures is making a distinct sound at this place. The legend says that that is the voice or the whisper of the devil. That is why people were avoiding to find themselves at this place after the sunset. But today, there are the lights on-site and many tourists are actually coming to see it at night. 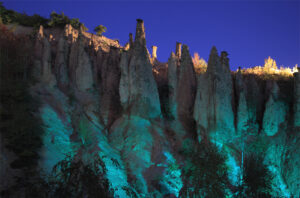 Đavolja Varoš is located 330 km south of Belgrade and 80 km south-west of Niš. The best way to come there is of course, by car. If you are coming from Belgrade, it is a long drive, so we advise you to spend a night in Niš or one of the spas (in Serbian: banja) which are close to the site. For example, Prolom Banja, Lukovska Banja, and Kuršumlijska Banja have several hotels or private villas where you can stay.

The entrance fee to the locality is 350 dinars (2,8 euros/$3,3 USD). On the site, you will find several viewpoints and platforms, souvenir shops, and a restaurant. The legend says that, if you drink from its springs, you will come back there.

As always, we can arrange anything you need. Let us know and we will organize everything – from transport and hotel to entrance tickets and spa experiences. We are looking forward to seeing you!