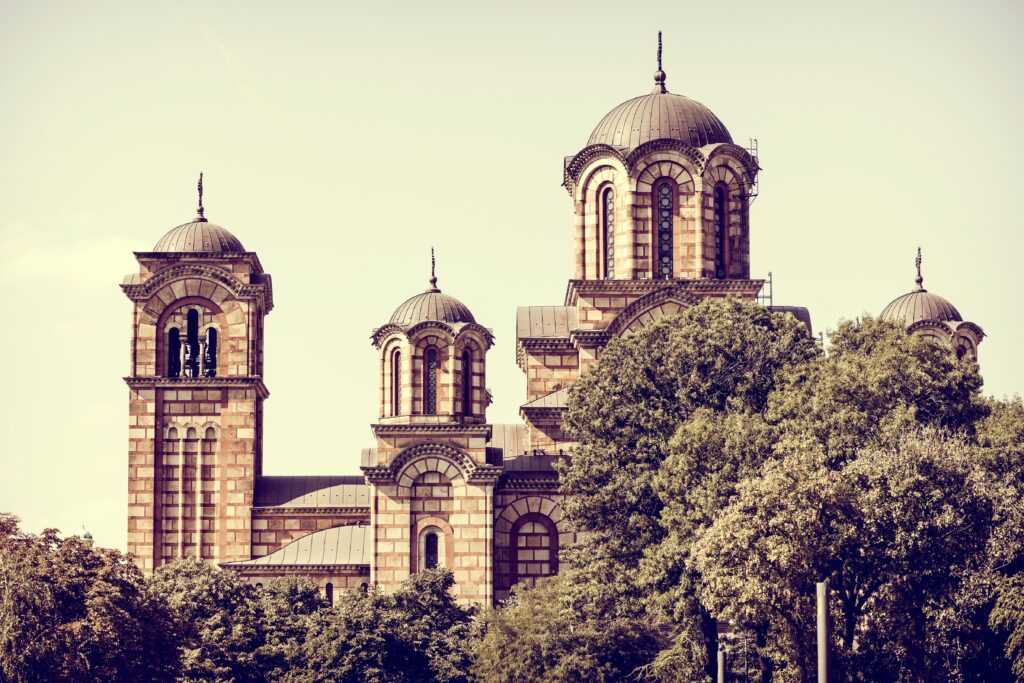 Belgrade – the capital of Serbia, is famous as the multinational and multicultural city. However, most of the people living here identify with Orthodox Christianity, and the sacral architecture of the city reflects it. The Belgrade churches and temples do not have only religious significance. Rather, they are an important part of the cultural heritage of our city.

Even if you are not religious, you are welcome to visit some of the religious objects in Belgrade. Some of them are pretty unique and interesting. Join us on our Belgrade City Tour and your guide will explain to you more about them. Entry to all religious objects is free of charge, though the donations are welcome. There is no need to dress formally for the visit. Of course, make sure your attire is appropriate. 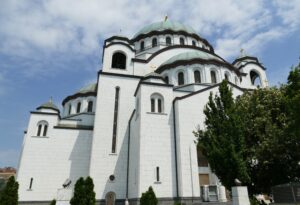 The Temple of Saint Sava – built on the elevated Vračar plateau, this temple is a symbol of Belgrade and it can be seen from almost every location in the center. Also known as Hram (Serbian word for Temple) it is a sight you can’t miss. It is the largest Orthodox church in Serbia, and one of the largest Orthodox churches in the world. The construction of the church interior is not finished yet. Hence it is also known as “the Serbian Sagrada Familia”. The architectural features are reflecting the Hagia Sophia’s characteristics.

The rich mosaics cover the interior. There are several galleries inside the church. One of the most impressive features is the basement. It contains the crypt, the treasury of Saint Sava, and the grave church of Saint Lazar. The plateau itself is very interesting as well. A splendid fountain is just in front of the church, and the National Library of Serbia is next to it.

St. Mark’s Church – it is located in one of our most beautiful parks – Tašmajdan. The architectural style is inspired by the Gračanica Monastery. The church treasury contains a collection of icons and religious artifacts. Some of them have great cultural importance. There is also the crypt, where the most revered patriarch and bishops have been buried. St. Mark’s Church, dating from 1944, is also one of the biggest Belgrade churches – just after the Temple of Saint Sava. 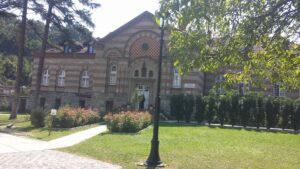 The cultural heritage of Belgrade churches

Ružica Church – this little church is very famous due to its location. It is situated in the Belgrade Fortress – Kalemegdan. A water spring “Saint Petka” is within the church property. Worshipers believe that this water has healing properties. So, it is not a surprise to see the crowds of people gathering to collect the water and pay respect to the church’s patron saint – Saint Petka. Another unique feature of this church is its chandelier. It is made of military supplies: bullets, shell cases, and sabers.

Rakovica Monastery – dedicated to archangels Michael and Gabriel, this is one of the oldest religious objects in the city. In fact, it is not a single church but a complex of several chapels, a graveyard, and a spring. Today, it is a convent for nuns. Certain date of establishment is not known, but it is believed to be in the year 1502. Of course, there were several reconstructions up to this day.

Belgrade is also the home to numerous Catholic, Muslim and Jewish populations. Of course, they have their own temples which are also interesting to visit. So, besides Belgrade churches, you can include some of these temples to your itinerary too. 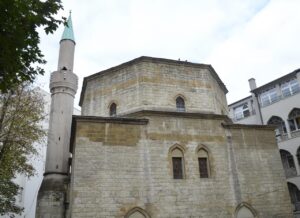 Other temples in Belgrade

There are over a dozen Roman Catholic churches in Belgrade. The most famous is the Church of the Assumption of the Blessed Virgin Mary. It is the church in the historic center of Zemun. Founded by Capuchin monks in the early 18th century, this church is a central spiritual place of local Catholics. Zemun used to be within the Austro-Hungarian empire, and it is noticeable even today in the architecture. Thus, it is no surprise that several other Catholic churches and even convents are located in that part of the city.

Bajrakli Mosque – located in the historical neighborhood of Dorćol, this mosque is one of the oldest buildings in Belgrade. It originates from the Ottoman era (since the year 1575). This mosque is not just the main Islamic cultural center in Belgrade. Due to its importance, it is under state protection as a cultural monument of great value.

Sukkat Shalom Synagogue or just Belgrade Synagogue is in the historic center of Belgrade as well. The Jewish history of Belgrade is quite long and rich. Unfortunately, only the small number of Belgrade Jews survived World War II. An even smaller number of them remained in Belgrade. This synagogue was designed to meet the various needs of the Jewish community. Hence, it serves as a place of worship, a place of study, and a place for community meetings. Of course, it is a cultural monument as well.

Belgraders of all religions and creeds are what makes this city so special. We cherish diversity and we are happy to have such a rich cultural and historical heritage within Belgrade. You are welcome to come and see it yourself! 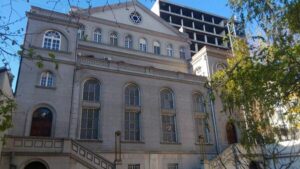